Learning French with Cartoons: Fun and Engaging Lessons for Kids

If you\’ve been studying French for a while, you might be looking for new ways to improve your skills. You could try listening to French songs, radio broadcasts, or other types of audio content.

When it comes to learning a new language, cartoons are a great way to get started. They are entertaining and educational, and kids love them!

There are a few methods for getting the most out of French cartoons.

The first is to start with familiar English-language cartoons that have been dubbed in French. This way, you’ll be able to understand the dialogue and get used to the accents and sounds of the French language.

Once you’re comfortable with the language, you can move on to watching French-language cartoons. These will be more challenging, but ultimately more rewarding, as you’ll be learning more about the culture and nuances of the French language.

Finally, be sure to take advantage of subtitles. This will help you follow the dialogue if you don’t understand some of the words being used.

With these tips in mind, you should be well on your way to mastering French cartoons!

Asterix is a French childhood classic

Although Asterix was never adapted into an animated series, the franchise is known by most French children. The various Astérix movies occasionally pop up on streaming services, giving kids all across France another opportunity to enjoy the antics of the titular Gaulish village.

What makes Asterix so special? Well, for one thing, the characters are instantly relatable. Even though they reside in a fantastical world filled with druids and magic potions, the Gauls feel like real people that you could meet on the street. This makes for a fun and engaging story that kids can easily follow.

Additionally, Asterix is infused with plenty of French culture. From the Gaulish village itself to the pun-filled dialogue, there\’s a lot in this franchise for kids to appreciate and learn about their own country.

Preteen years are a time of change and confusion for many young people. This is especially true for Titeuf, who is just starting to experience the ups and downs of puberty. Titeuf is learning about relationships, love, and sex for the first time, and he\’s doing it all in the public eye.

Throughout the series, Titeuf is always getting into wacky adventures with his friends. Whether they\’re trying to win a beauty pageant, saving the world from a mad scientist, or just trying to get through school without getting into trouble, these kids never stop scheming.

What makes Titeuf so relatable is that he\’s always stumbling along as he tries to figure out this new world he\’s living in. He makes mistakes, but he always learns from them. And along the way, he gets some hilarious advice from his buddies and family members.

Netflix\’s Voltron: Legendary Defender is an action-packed show that follows the adventures of five Paladins who pilot giant lion robots in order to save the galaxy from the evil Galra Empire.

The show is a modern reimagining of the 1980s cartoon series of the same name, and like other popular Netflix originals, is available in French.

The Paladins must work together in order to form Voltron, the universe\’s only hope at defense against the Galra Empire. The show is full of exciting action sequences and humor, and it\’s sure to please fans of both Voltron and robot shows in general.

The Zinzins of l’espace are a group of aliens who have landed on Earth and are hiding in the attic of a rental house.

They are constantly coming up with harebrained schemes to return to their home planet, but these always end in disaster. Their situation is complicated by the humans who live downstairs, forcing them to use their “SMTV” (“Super-Méga-Trans-Volteur”) to take on different forms.

The Zinzins provide much of the comic relief in the series and are a fan favorite.

She-Ra: The Princess of Power

After learning her true identity, Adora decides to leave The Horde and join forces with Bow and Glimmer in order to defeat The Horde and protect the planet Etheria.

She-Ra: The Princess of Power is a highly entertaining show that is filled with action, adventure, and humor. The characters are well-developed and likable, and the story is compelling and exciting.

She-Ra is perfect for both kids and adults, and is sure to leave viewers entertained and inspired.

Corneil and Bernie: The Adventures of a Genius Dog and His Best Friend

Corneil and Bernie are two of the best friends a dog could ask for. No matter what shenanigans Bernie gets into, Corneil is always there to help him out.

Whether they’re out on a walk, playing fetch in the park, or just hanging out at home, these two always have a good time. And even though Corneil is a genius dog, he never lets that go to his head – he’s just happy to be spending time with Bernie.

Their friendship is one for the ages, and we can’t wait to see more of their adventures.

The Adventures of Sophie

The Adventures of Sophie is a heartwarming French animated series based on the book “Les Malheurs de Sophie”. The series follows the adventures of young Sophie as she navigates her way through life’s challenges with courage and determination. From making new friends to facing her fears, Sophie is always up for an adventure.

The animation is simply stunning, and the clear, formal French spoken throughout the series makes it a must-watch for all Francophiles. So if you’re looking for a feel-good show that will teach you a thing or two about life, The Adventures of Sophie is worth checking out.

Avatar: The Last Airbender is an Emmy award-winning American animated television series created by Michael Dante DiMartino and Bryan Konietzko. The series aired for three seasons on Nickelodeon from 2005 to 2008. A sequel series, The Legend of Korra, aired from 2012 to 2014.

Avatar follows the adventures of Aang, a young boy who is the last known airbender and the Avatar, Bender of all four elements: air, water, earth and fire.

Aang must travel with Sokka and Katara to master all four elements and stop the Fire Nation from conquering the world. The first season sees them journeying to the North Pole to find a waterbending master to teach Aang how to control water.

The show is praised for its well-developed characters, its humor, and its action sequences. It has been nominated for numerous awards, including Annie Awards, Emmy Awards, and a Peabody Award.

Created by French author Annette Tison and illustrator Talus Taylor in 1970, La Famille Barbapapa is a series of children’s books about a family of friendly, shape-shifting aliens. The Barbapapa family helps humans and animals alike, all with powerful environmental messages.

The name Barbapapa comes from Barbe à papa, which translates to “cotton candy” (literally “daddy’s beard”), the treat which Barbapapa and his family closely resemble.

The official website has some clips available in French. It’s also a great way to supplement your learning with some reading practice, thanks to the character descriptions, which are written in very simple French.

The Adventures of Tintin: A French-Language TV Series for Children

\”Les Aventures de Tintin\” is a cartoon about a reporter from Belgium named Tintin. He solves mysteries with his dog Milou all around the world.

This Belgian comic book, which was published in French, has become a beloved cultural icon in France and Belgium. In 1991, it was made into a full-length cartoon series.

The adventures of reporter Tintin and his dog Milou continue in this animated series, which is based on the comic book that has been beloved around the world since Hergé created it nearly 80 years ago.

With a strong cast and high production values, \”The Adventures of Tintin\” will keep your children captivated.

Le Petit Nicolas is a charming graphic novel series that follows the hilarious adventures of Nicolas and his friends.

The simple vocabulary used in the stories is perfect for young readers, and the stunning visuals will keep them engaged. Nicolas’s adventures are sure to charm readers of all ages, and the graphic novel series is a must-read for anyone who loves a good laugh.

If you’re looking for a lighthearted and fun read, Le Petit Nicolas is the perfect series for you. With its charming visuals and simple stories, it’s sure to put a smile on your face.

If you\’re looking for a French cartoon that\’s both action-packed and heartwarming, look no further than Miraculous, Les Aventures de Ladybug et Chat Noir. The show follows Marinette and Adrien, two teenagers who must protect Paris from an evil villain using their magical superhero powers. While they both must keep their identities secret, neither Marinette nor Adrien are aware of who the other is—which makes things complicated, considering that Marinette has a big crush on Adrien!

This show is available on Netflix and Disney Plus, with Netflix offering the original French dialogue! If you\’re looking for a fun and exciting French cartoon to watch with your family, be sure to check out Miraculous, Les Aventures de Ladybug et Chat Noir.

Cartoons are a great way to learn French, as they are entertaining and educational. We have discussed some of the best French cartoons for kids. We hope you find these suggestions helpful and that you enjoy watching them with your family! Thanks for reading! 🙂

Previous Post: Learn French After Spanish: How to Easily Transition from One Language to the Next

Next Post: Learn French While You Sleep: How to Easily Master the Language in Your Bed 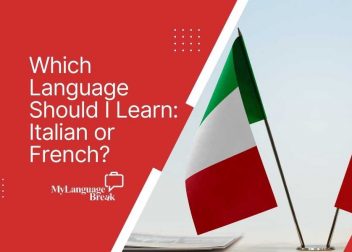 Learn French After Spanish: How to Easily Transition from One Language to the Next