Do you want to learn French pronunciation but feel overwhelmed? Don’t worry, we’re here to help! We will discuss some simple tips that will help you master French pronunciation. With a little bit of practice, you’ll be speaking like a native in no time! Let’s get started.

French pronunciation is important for proper communication. By paying attention to the phonetics of the language, you can produce the sounds correctly and communicate with others in French more effectively. Additionally, be aware of other features of speech such as intonation and rhythm to make your conversation sound more natural.

The Benefits of Learning French

Learning a foreign language can be extremely beneficial for many reasons. One big reason is that it can help when traveling to other countries. It can also help with job opportunities since many companies are now looking for bilingual employees. Additionally, learning a foreign language has been shown to strengthen cognitive abilities. This is because when you learn a new language, you are essentially learning a new way to think. Pronunciation is also an important skill to acquire to speak the language fluently. If you can pronounce all of the words correctly, people will be able to understand you better.

The pronunciation of French words and sounds is essential to speak the language clearly and understandably. Mispronouncing a word or sound can make communication difficult, so it is important to learn the basics of how to pronounce French correctly. This guide will help you get started.

Another thing to keep in mind is that many French words are pronounced differently depending on their position in a sentence. For example, the word “un” (meaning “one”) is pronounced differently than when it is used as part of a number like “deux” (meaning “two”). The best way to learn these variations is to listen to native speakers and practice saying different phrases aloud.

The tips above should give you a good starting point for pronouncing French correctly. With a little bit of practice, you’ll be speaking like a pro!

Being Curious about French Pronunciation to Improve Your Speaking Skills

When learning a foreign language, it is important to be curious and explore all aspects of the new language. This includes understanding how the words are pronounced and practicing speaking the language regularly. Pronunciation can be difficult to master, but it is essential to improving your fluency. With regular practice, you will be able to speak French like a native speaker in no time!

How to Improve Your French Pronunciation

Practicing French pronunciation is essential to improve your speaking skills. There are a few things that you can do to help make the process easier. One is to read about French pronunciation and learn the International Phonetic Alphabet (IPA). This will give you a better understanding of how the sounds are represented in writing. It can also be helpful to practice difficult words and phrases, as well as the rhythm and intonation of the language. You should also be aware of silent letters, liaisons, enchainement, and assimilation. Understanding these concepts will help you produce more accurate French pronunciation.

The best way to learn French pronunciation is by using the International Phonetic Alphabet. English speakers already know how to pronounce 60% of French sounds, so it’s a good place to start. To practice on your own, you can use IPA and techniques like recording yourself, listening to your pronunciation, and repeating. This will help you get comfortable with the sounds of French and improve your pronunciation. 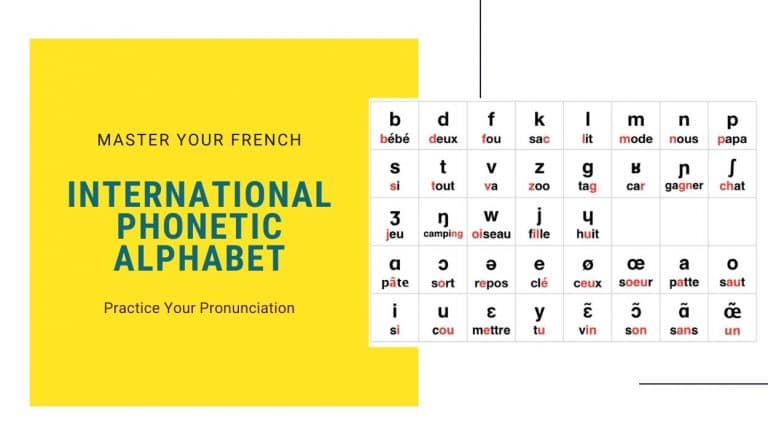 The Silent Letters of French

The Art of French Liaison Pronunciation

Liaison is an important part of the French language. It is when a consonant that is normally not pronounced can be pronounced if the word that follows begins with a vowel or silent -h. In making the liaison in French, the consonant that is pronounced becomes part of the syllable of the following word. The letter -d is pronounced /t/ while making the liaison in French. This can be difficult for English speakers to master, but it is an important part of sounding like a native speaker.

There are three kinds of liaisons in French: mandatory, forbidden, and optional. A mandatory liaison must be used, such as between an adjective and the following noun. A forbidden liaison cannot be used, for example between a singular noun and the verb that follows. An optional liaison can be used but isn’t required, for example after a verb.

Enchainements in French: Linking Words Together

The Mechanism of Assimilation

The mechanism of assimilation is a change in the sound linked to and presumably caused by another close sound. Whenever 2 sounds are close to each other within the same word or in a sequence of words, they influence each other. For example, in the French word médecin (pronounced /metsɛ̃/) the letter -e is not pronounced. The sound of the letter -d changes and becomes /t/ in this word.

How to Pronounce French Words Correctly

To improve pronunciation, it is important to understand that you need to reshape the way you move the muscles of your mouth. This requires consistent exercises. Building new pronunciation muscles is not easy, but it is worth the effort for better pronunciation.

Nasal vowels and other French-specific sounds

To properly produce the French sounds “on”, “an”, and “in”, it is necessary to learn how to produce the nasal vowels. To do this, simply add a bit of air through your nose when you say these vowel sounds. The French “u” sound also doesn’t exist in English, so it is important to practice saying this vowel sound as well. To produce the “u” sound, start with a regular “o” sound and then add just a tiny bit of air through your nose at the end. With a bit of practice, you’ll be pronouncing all of the French sounds like a native speaker!

The best way to improve your pronunciation of French words is to practice. You can find tongue twisters to help with this, or simply repeat words and phrases out loud. It may feel awkward at first, but with time and practice, you will be able to speak French like a native.

Practicing difficult words is essential to mastering their pronunciation. This includes words that are tricky for native English speakers, such as faux pas. By understanding what makes these words difficult, and then practicing accordingly, you will be able to pronounce them like a pro!

The Effortless French Pronunciation series provides access to numerous video exercises. The videos are short, and they are divided into 2 groups: those that focus on hearing the difference in pronunciation, and those that focus on pronouncing words correctly. In each short lesson, either two words are compared or how to pronounce a word or sentence is taught. This format makes it easy for learners to follow and practice their pronunciation.

Learning French pronunciation can be difficult, but it doesn’t have to be. With a little bit of practice and these simple tips, you’ll be on your way to sounding like a native speaker in no time. And if you’re looking for more help with learning French, Preply.com is a great resource. They offer online tutoring with native speakers who can help you with all aspects of the language, including pronunciation. So don’t wait any longer, start perfecting your French pronunciation today!

Next Post: The Italian Challenge:Can You Learn the Language in One Year? The Italian Challenge:Can You Learn the Language in One Year?

The Italian Challenge:Can You Learn the Language in One Year?